For each RFI, RFP or quotation you are up against the same dozen of players in the market. And they are all claiming that they can deliver on whatever is being requested. In addition, the profits are dwindling due to different sourcing strategies in the form of self-employment, off- and nearshoring, payrolling, and whatever else there is.

Given these market conditions, what could help to (re)gain market differentiators while maintaining sourcing flexibility and a sense of humanity? In other words, how to build a sustainable business?

These fragmented market conditions and the constant “hunt” for new customers is a side effect of consumers and companies trying to avoid long-term contracts and big one-time investments. Ideally, they would like to take everything based on actual use and at a fixed pay per month subscription; which is already a challenge in itself!

After looking at the potential of self-managing teams and a dive into the history books, it seems to me that many are busy reinventing the wheel. Because all the ingredients for the “old, new” works are already available in the form of cell structures. Just look at this Dutch company called BSO which considered this their best-practice in the nineties. 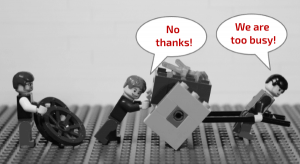 In an interview in 2007 the founder, Eckart Wintzen, explained the essentials about the how and why of such an approach. Based on this interview, I can only conclude that there is enough room to stimulate the intrinsic motivation of flexible labour sources and thus improve the binding and operating profit. When looking at the growth numbers of BSO over the years, this seems more than enough justification for such an approach; even when taking the differences in market conditions into account.

However, to align the approach with the current society and technology, I would work with smaller cells and use a management and control model where more result oriented parameters are in the lead. Driving the business based on customer retention and innovation seems to be a far better model. Revenue and profits then come in more seamlessly since there is a causality between customer retention and innovation being the reason for a companies’ existence. More on that one further down the line.

In addition, based on the interview mentioned previously, it is more or less obvious that everyone within a cell, including temporary workers, freelancers, etc., actively contribute to the retention and innovation. This includes responsibility and rewards for the results.

A management & control system purely on financial parameters could also be considered result oriented. However, from my perspective that is more like trying to drive a car by constantly looking in the rear-view mirror. After all, the financial numbers of today are the result of something that is already done somewhere in the past; so there is little to nothing to “steer”. At best you can hit the brakes if a “collision” is likely to occur by (for example) cash flow problems. But whether that is helping in getting new customers on board and keep them there… Well, I have my doubts…

The idea is that a change either incoming or outgoing, is easier for customers with relatively low contract value and a little amount of employees. Although the impact for a small company is fairly large, it is not a Mission Impossible; something that is more often the case in large companies because of the many relationships in- and out-side the company.

This way, these specific set of customers act as an early-warning system. An analysis of those who intend to leave gives and insight into what the gaps are with the current services. While an analysis of those intending to sign a contract gives an insight into the aspects by which the competition can be ruled out. The results from both is used to start improving/innovating the services which again guarantees the necessary growth.

An additional advantage of this approach is that the leadership team has a better idea about the core elements and which services deliver added value. After all, they have the final say on any improvement or innovation project. Since customer retention is one of the key business drivers, the leadership team has no other option then researching the business drivers of their customers before giving a go or no-go.

Two examples of control parameters around innovation: revenue (in euro’s) and profit (in percentage) for both existing- (1) and new (2) services. The definitions for “existing” and “new” are not that important just as long as they are applied consistently; including the transfer from “new” to “existing”.

Here is the underlying principle that as long as both are increasing over time, there is not a lot to worry about. However, given the life cycle of a product or service, there comes a time when revenue growth and/or profit is declining. That is the moment to accelerate the amount of new customers and the profit for new services.

If there is only a decrease in profit, you might want to have a closer look on the cause. However, if both, revenue and profit are declining, it is actually a red alert.

By combining a cell structure and innovation, you are in a much better shape for anticipating social- and technological changes because the cell structure is an enabler for innovation in three ways. One way is innovation within a cell for a single customer; or at least a limited set of customers. While innovation across multiple cells can be about a particular industry (second way) or about a certain market segment (third way). But in all three cases, innovation is fairly easy to manage with a shorter time to market compared to a more traditional type of organization.

From my perspective, this interplay of customer retention and innovation are considered the primary drivers of the companies’ business and therefor its existence. The suggested leading management parameters of the internal- (innovation) and external (customer retention) results are the control buttons. This allows you to maximize the benefits of the buoyancy in the “blue oceans” as opposed to drowning in the “red oceans“; something that is described in great detail in the book of W. Chan Kim en Renée Mauborgne.

The writers of this book describe a strategy on how to change the business model from being part of a highly competitive market segment to being part of a fairly new one; something that seems more then welcome when looking at the highly fragmented market conditions within smaller countries like the Netherlands. 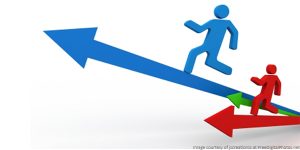 This strategy expects companies to innovate and save costs at the same time; something that can be done relatively easy when the structure of an organization is based on (more-or-less) autonomous operating cells.

It is my believe that this approach also works as value chains and business models are changing. Take for example the telco industry: from SMS messages (pay for sending messages) to something like WhatsApp (pay for knowledge about a group of consumers based on messages sent).

At the end of the day, the telco industry was managed based on revenue and profit only; customer retention and innovation where not considered leading indicators within their management control systems. As a result, they were not able to get aligned with these new market conditions based on new, appropriate services. What remained was a way of fire fighting based on, for example, higher pricing models for data subscriptions and an on-going process of making people redundant.

The combination of a cell structure and innovations with one of the three ways mentioned previously makes the company and its business sustainable. This is because even with large social and technological changes, those patterns more resemble an evolution instead of a revolution. As a result, a training for the people that make up a cell is more of an on-going process with small steps as opposed to a big-bang.

Typically, a bigger, more of an educational type of program is part of a decision for tapping into the potential of an adjacent market segment where complementary knowledge and skills are required. Potentially combined with one or more new cells based on a split-off from the existing ones.

With that in mind, replacing people is then more the result of individual decisions to take a plunge into the “red ocean” with one of those dime a dozen competitors. Apparently, for whatever reason, these individuals do not want to spend time on training and education.

The moment customer retention and innovation receive little or no attention you can expect an increasing amount of customers that do not want to extend their contract. In addition, the amount of new customers will decline. Based on the previously mentioned product life cycle this is because competitors step-in with something comparable or better and with better terms & conditions. As explained earlier, I expect this pattern to start with the smaller customers, then spread to the larger ones and ends in a liquidation or acquisition.

You might be able to buy some time by cutting costs. Any organization that grows over the years has some useless overhead. By removing that overhead, you have some extra people and resources available to accelerate a number of measures already in place. These measures should contribute to an acceleration of the number of customers; ideally for previously developed new services.

If these measures are not in place you are actually too late; let alone if you have to start with customer retention and innovation! In that case I would recommend looking for an investor that is willing to help out for a certain percentage of the company shares.

On the basis that you succeed: this is also the earliest possible moment to start thinking about an exit strategy…